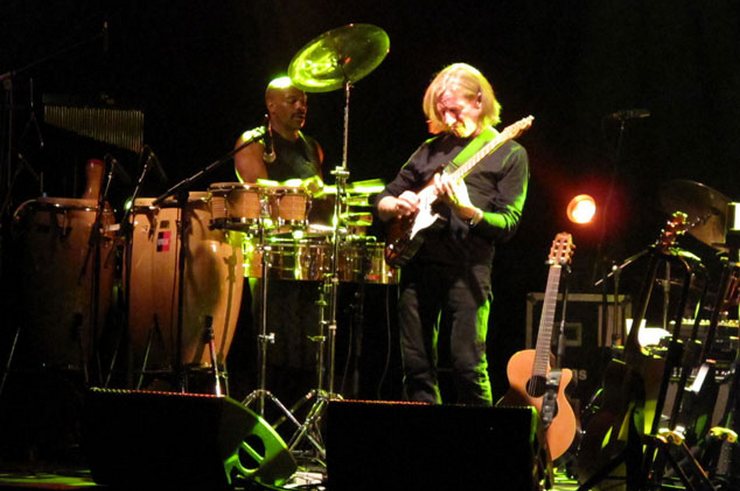 Contemporary jazz musician and guitarist Brian Hughes, a Los Angeles resident who has been performing at jazz festivals and concerts around the world with renowned artists and bands, will be performing live at the Concert in the Park in Farnsworth Park on Saturday, July 18th, starting at 7 p.m.

The free summer concert series, which happens every Saturday night, is a project of the Sheriff’s Support Group of Altadena and the Department of Parks and Recreation of Los Angeles County.

Now on its 19th year, the free concerts are made possible with the support of several other civic groups and institutions in Altadena.

Brian Hughes grew up in Alberta, Canada and moved to Los Angeles in 1981 where he studied at the Guitar Institute with Pat Martino, Joe DiOrio and Robben Ford.

For the past 25 years, he has been recording and touring with renowned vocalist Loreen McKennit, playing the guitar, oud and bouzouki. Hughes’ skills are evident in McKennit’s Grammy-nominated recording, “Troubadours on the Rhine.”

McKennit has sold over 15 million albums worldwide and Hughes has toured with her several times, appearing on the Late Show with David Letterman and receiving a Juno (Canadian Grammy equivalent) nomination as Producer of the Year for his work on McKennit’s platinum album, “The Visit.”

Hughes recorded “Under One Sky” for Justin Time in 1992 and then started his own label, Sylvan House Music, in 1995 which was distributed by Warner Music Canada and licensed to Higher Octave / EMI in the USA and abroad. Brian recorded three more albums – Straight To You, One 2 One and Shaken Not Stirred – under this arrangement before releasing Along The Way with A440 music group in 2003.

Hughes returned to his Sylvan House Music imprint for the release of LIVE (2007), No Reservations concert DVD (2009) and Fast Train to a Quiet Place in July 2011.

He has been residing in Los Angeles since 2000.

Other upcoming concerts at Farnsworth Park this summer include performances by the Manning Brothers and Friends on July 25th, The Mighty Burnt Bacon on August 1st, Upstream on August 8th, Kings of 88 on August 15th, Whiskey Hayride on August 22nd and Floyd and the Flyboys on August 29th.