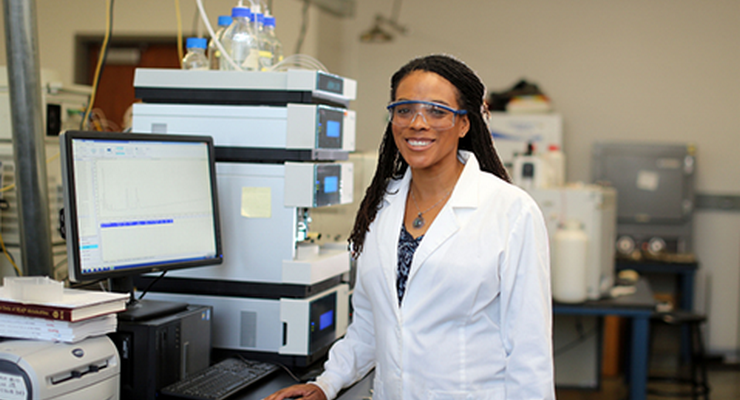 Cal State LA Chemistry Professor Krishna Foster is set to be honored as a Minority Access National Role Model in recognition of her exemplary achievements in the field of science, technology, engineering and mathematics.

Foster will be acknowledged during the Minority Access Inc.’s 17th Annual National Role Models Conference, which is scheduled to be held from Sept. 30 to Oct. 2 at The Mayflower Hotel in Washington, DC.

“I am truly humbled and honored by this award, which acknowledges the effort I have invested in realizing inclusive excellence in STEM for Cal State LA students,” said Foster, who resides in Altadena.

The National Role Model Awards identify leaders in various disciplines who can inspire others to succeed and increase the pool of scholars and professionals who will find cures for illnesses, solve technological problems, or address social disparities in society.

Foster’s work to ensure student excellence in chemistry serves as an example for other professors. She has a distinguished record as a scholar with numerous peer-reviewed publications and presentations at national conferences.

Foster has been a leader in mentoring first-generation, low-income students from diverse backgrounds who have achieved successful careers as scientists and researchers. She is associate director of Cal State LA’s Minority Opportunities in Research Programs (MORE), which is an umbrella organization for programs funded by the National Science Foundation (NSF) and National Institutes of Health.

The NSF lists Cal State LA as the top baccalaureate institution of origin for Latino science and engineering Ph.D. recipients among all undergraduate and master’s colleges and universities in the continental U.S.  Alumni of the MORE programs were the largest contributors to this listing.

Through the American Chemical Society’s Project SEED, Foster has served as a research mentor and hosted students in her lab. She is also a member of the National Organization of Black Chemists and Chemical Engineers.

In 2007, Foster received a Distinguished Women Award at Cal State LA.  In 2011, she was the subject of an oral history project, ScienceMakers, documenting African American leaders who have made significant contributions to science  education. Last year, she was an Insight Into Diversity Inspiring Women in STEM Award recipient. Most recently, Foster was one of only 25 candidates selected to participate in the inaugural class of the Emerging Leaders Program, organized by the American Association of State Colleges and Universities.

Foster earned her bachelor’s degree in chemistry from Spelman College in Atlanta and her Ph.D. in physical chemistry from the University of Colorado at Boulder.