“Art on Palm” Fills Wildwood with Works of Art 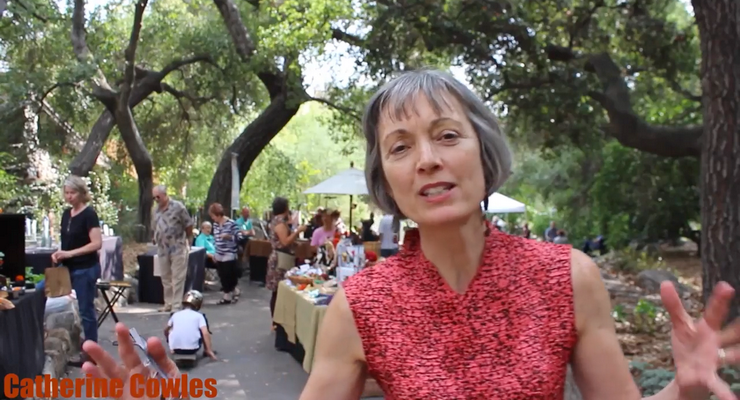 Saturday morning in Wildwood Park, under a canopy of ancient oaks, forty-two artists came out to exhibit and sell their work, which included a lamp made out of cooper and brass, with hawk feet for legs.

The hawk-legged lamp was the work of artist Evan Chambers. Another one of his lamps had octopus tentacles. Chambers is from Pasadena and his work can be found at the Gold Bug in Old Town Pasadena.

“Art on Palm is an art show that began in a friend’s backyard,” said Catherine Cowles, one of the organizers for the event. “We gathered play buddies together and we put on a show and people came!” she added enthusiastically.

The show featured works of ceramics, collage, glass, jewelry, woodworking, textiles and the Bull Fish blues band. All in a “casual, calm setting,” according to artist Ovie Cowles, whose exhibition was the Leaf Motif. Ovie Cowles is also Catherine Cowles husband and together they created Leaf Motif, which offers a range of home decor products, including original multi-leaf collages, leaf sculptures, a line of illuminations, and many more.

According to Catherine Cowles the work of the artists present at Art on Palm is “very distinctive, hand-crafted art.” Such is the case for the work of artist, Belinda del Pesco. Pesco’s work featured a selection of watercolor and printmaking, including the watercolor piece, “Kitchen Sunset.”

Aside from painting, Pesco also has a YouTube channel with tips and lessons on painting and printmaking: https://www.youtube.com/user/bdelpesco

“Today it’s very hard for artists to make substantial income doing retail shows,” said Catherine Cowles, “so they have to be very careful that they go to an audience that is qualified and appreciative. We find that the people who come to Art on Palm are.”

According to Catherine Cowles, the people who come to Art on Palm come not only for the distinctive artwork, but also for the “beautiful, magnificent sight.”

An ancient oak road surrounds Art on Palm and homes that were renovated by architect Henry Green. “It is just a spectacular, soothing, restorative location,” said Catherine Cowles. “It’s a terrific show and we look forward to inviting everyone to come into the event.”

The show occurs twice a year and for more information you can visit their website: http://www.artonpalm.com/