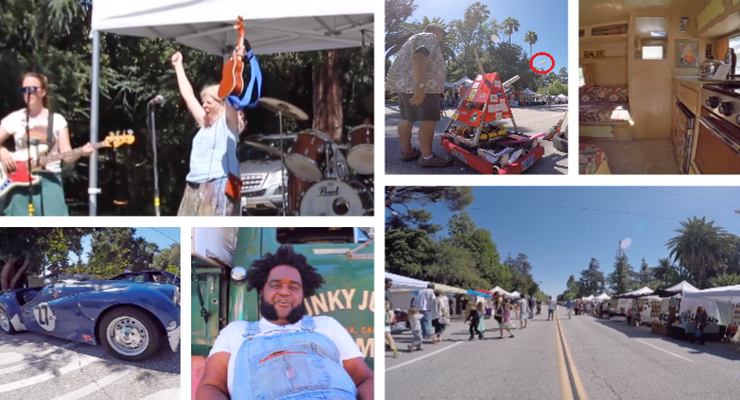 “Are you ready?” said Gerry O’Rourke, as he prepped his T-Shirt Canon for blast off.

Rourke’s canon shot out several t-shirts this Saturday morning at the Altadena Best Fest and was the hit attraction amongst kids.

“It’s so cool. I really want one in my bedroom,” said Scott Jameson, dripping in sweat from having run around trying to catch one of the shirts.

The festival took place on Mariposa St., where a section was blocked off from traffic, and several stands, food trucks, and even vintage trailers and campers came out for the “beautiful day,” as pointed out Johnny Agnew from Funky Junk Farms.

Agnew was one of the vintage trailers and campers exhibitors. According to him, it was a “great crowd” and he was “glad to be a part of it.”

The trailers ranged from big to small, to tiny. Marty Cox’s was in the tiny group-range. He sat outside, under the canopy of his small trailer and rocking back and forth on his wooden chair, as the many guests from the festival walked in and out to have a peep. The interior was decorated in shades of pink and included a fully functioning kitchen, dining table, CD collection, and all the basics for a home.

Walking along Mariposa St., beneath the tall deodar trees, guests spotted such stands as the Los Angeles Sheriff’s Department Recruitment stand, the Hot Topic Female A Cappella Quartet, and the Adopt a Pet Truck from the Pasadena Humane Society and SPCA.

This was Altadena’s first Best Fest and also included many arts and crafts activities for the children and a traditional pancake breakfast from the Kiwanis Club of Altadena/Crown City. For more information , visit: http://altadenabestfest.com/