The weekend of April 18 and 19 showcases books, games, and more at the LA Times Festival of Books. Local publisher Bitingduck Press will display a booth at the festival highlighting this Spring’s catalog, some upcoming titles, and a patented system for selling e-books through any retailer. 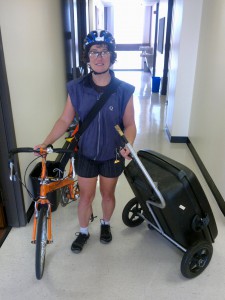 Here is Jay delivering materials to the LA Festival of Books on her bike in a previous year.

For the fourth year in a row, the Bitingduck Press owner Jay Nadeau will be traveling from her home in Altadena to the Festival by bicycle, and encourage questions about bike commuting as well as submissions about green living, particularly the car-free lifestyle.

Just about to be released is Bill Bunn’ s “Kill Shot,” a young adult adventure about a Labrador teen who finds the remains of a sunken World War II U-boat. The text alternates between the boy’s adventures in the present day and the drama that led the German crew to perish in a Canadian river seventy years ago. The story is fully fictional, but is based upon the discovery of a U-boat off the shore of Eastern Canada. Bill will attend the Festival and will offer signed pre-release copies of the book, as well as copies of his two other Bitingduck titles, Duck Boy (a teen adventure) and Hymns of Home (inspirational essays).

Also displayed at the festival will be the technology WebBytez, a system for selling electronic goods in physical stores in a way that allows the physical retailer to earn a part of the profit in return for displaying and promoting the product. The system works by providing the retailer with postcards with scannable QR codes; purchasers use the code to buy the product directly from the press. The code contains information telling the e-store where the postcard came from, so credit can be given to the merchant. The postcards are free, so all visitors to the festival are encouraged to take a card for any book of interest and will receive a discount code for a free book by visiting the booth.

The press will also be looking for submissions from fiction authors, particularly those writing about science or scientists. Since its beginning in 2012, Bitingduck has grown from 2 titles to over 150, and also offers technical editing services for non-book documents, e-book conversion, and other technical services. The press also encourages visits from freelance artists and editors for cover design and copy editing.