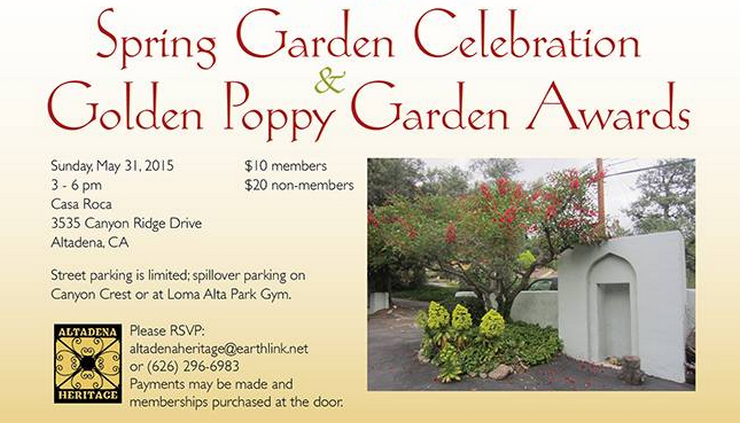 On May 31, Altadena Heritage will hold its 2015 Spring Garden Celebration and Golden Poppy Garden Awards from 3 to 6 p.m. on the historic grounds of Ed Ellis’s 1905 home, Casa Roca, the former domicile of visionary Horace Dobbins.

Dobbins’ plan to build an elevated bicycle-way from Pasadena to Los Angeles was thwarted by none other than Henry Huntington, who, smelling competition, got a court injunction to halt construction that he claimed violated his trolley line’s right of way.

Casa Roca, located at 3535 Canyon Ridge Drive, was as visionary as its original owner, featuring a number of architectural elements that were advanced for the era, including steel-reinforced concrete, a dome for water capture and storage, and solar water heating!

Join us for an entertaining afternoon of food, libations, music, conviviality — and, of course, the Golden Poppy Awards (program from 4 to 5 p.m.), through which we honor Altadena residents whose gardens enhance our neighborhoods.

Also, a first! The first-ever winner of the Altadena Heritage Big Tree Contest will be revealed.

Tickets are $10 for members and $20 for non-members. If you’re not already a member of Altadena Heritage, this would be a great time to join, organizers suggest. Go online to altadenaheritage.org, or join at the door and save $10 per Golden Poppy Garden Awards ticket.

Please RSVP to altadenaheritage@earthlink.net or (626) 296-6983. Cash payments and checks made out to Altadena Heritage will be accepted at the door.