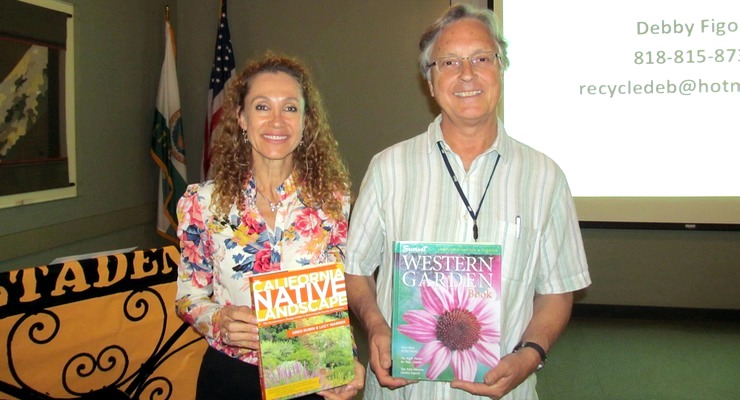 If you’ve ever been tempted to buy a bunch of different plants and cram them together in your yard, Mark Goldschmidt has one word of advice: Don’t.

“You really do need some kind of structure,” Goldschmidt said of cluttered yards. Hardscapes, pavement, walls and hedges can organize a disordered front lawn, he continued.

“You need something to contrast with the plants,” he said while presenting a slide show highlighting a variety of landscapes found in Altadena yards.

While the former architect appreciates gravel, rocks and dry stream beds in front lawns, he warned the several dozen people gathered in the community center for his talk not to use rocks in excess. In addition to those materials, Goldschmidt suggested that audience members give concrete, decomposed granite, flagstone and brick a try.

He called concrete one of his favorite materials and praised decomposed granite for being both beautiful and inexpensive. However, he warned that anyone with flagstone should not just place the material down in the soil but reinforce it with concrete, as it won’t stay in place without it.

Goldschmidt praised brick for being flexible and warm but noted that three or four major brick producers went out of business after the recession, making it difficult to find a variety. He singled out La Canada Rustic Stone Inc. at 1385 Lincoln Ave. in Pasadena as a great local source of brick.

Goldschmidt also took a moment to discuss lighting yards, noting that LED lights are evolving. But “you can overdo it,” he said of lighting.

The key to having the best yard?

Open-mindedness, according to Goldschmidt.

“Everybody’s an architect,” he joked. “Listen to people. Always be open to others’ way of doing things. I get ideas from children sometimes. Sometimes, they have the best ideas.”

“Yes, we’re in a drought, but we still want to water our lawn,” she said.

She suggested including native plants, more than others, in the landscape, calling them good for wildlife. She pointed out a number of low maintenance plants Pasadenans can include in their yards, such as Lavender, Goodum Creek and Kangaroo Paw. She also described native plants such as Manzanita, Toyon and Coral Bells.

Figoni wrapped up by offering a list of irrigation tips, including watering early in the day and doing so deeply.

She warned the public not to rely on seasons to determine how much water plants need. That’s because the drought has shifted the longtime patterns. A plant that never needed water in the summer may now need water year-round.

Figoni also urged the audience to think carefully about which trees they plant in their yards.

Editor’s Note: This series continues on October 24, from 11:30 a.m.-1:30 p.m., when the focus turns to on-site planting, plants, and irrigation in a session that costs $15 (pre-paid) if you are not an Altadena Heritage member. For more, contact altadenaheritage@earthlink.net or visit AltadenaHeritage.org/water-wise-landscaping-workshop.