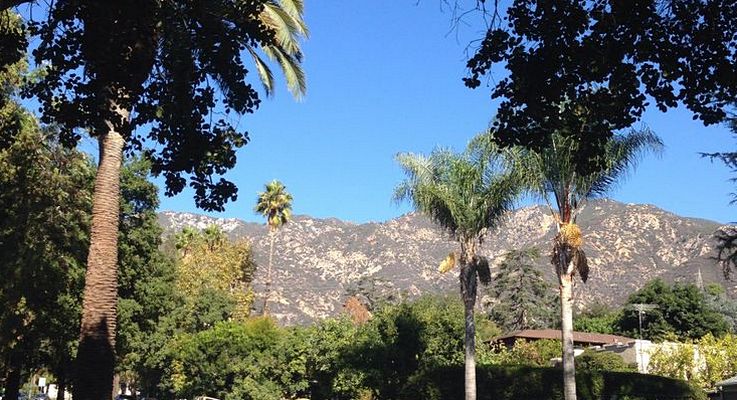 The community was ranked number one for air quality, based on the amount of time residents and visitors spend breathing air that’s low in dangerous particle pollution, according to Gabriel Kahn, a professor of professional practice at USC’s Annenberg School of Journalism.

“So, yes, some bragging rights are in order,” he said.

Small particles in the air have been declining at the nationwide level for three decades, with pollution levels dropping by around half in many areas, the study found. But L.A. ranks among the worst.

The professor cautioned against over-simplifying the matter.

“Air quality and lung health are both complicated issues, and we don’t want to reduce it to just clean (versus) dirty. However, in looking over a lot of data, we can say that air quality levels are generally better in (Altadena).”

So just how tiny are these harmful particles? Less than 2.5 micrometers. Or as the EPA puts it, 30 times smaller than the diameter of a human hair. Particles of this size are described by experts as PM 2.5. And they’ve been linked to health problems ranging from asthma to diabetes.

In the cases of both Chinatown and Altadena, Kahn said vehicles are the main driving factor.

“Auto exhaust is one of the main sources of PM 2.5 pollution, so no wonder that downtown, Chinatown, etc., are so high on the list of places with frequent unhealthy readings,” he said. “But you guys (in Altadena) have only one freeway, less density, and a forest as your backyard.”

Study authors hope the information in this study, as well as others by Crosstown, will be useful to the community.

“In general, we like to say that the more citizens know about these nuances in the data the better. When to exercise, where to exercise, where to live if you have a respiratory condition… all can be helped by putting the data in the hands of citizens. That’s what we want to do, and we do it for crime, traffic and air quality.”

The air quality study looked at air quality data from the EPA and the South Coast Air Quality Management District collected between November of 2016 and October of 2017. Researchers then put the data into an artificial intelligence model for analysis.

The project was conducted by Crosstown, a new collaborative project by USC’s Annenberg School for Communications and the Integrated Media Systems Center at the USC Viterbi School of Engineering. The initiative is designed to examine data to provide insights into quality of life issues in the county.

The artificial intelligence model was developed alongside the Spatial Sciences Institute at the Dornsife College of Letter, Arts and Sciences. Other partners in Crosstown’s project include the USC Information Sciences Institute and USC’s Keck School of Medicine.

More information on the air quality study, anas well as others by Crosstown, is available at www.xtown.la.